Our clients first approached us late 2016, as they were planning to build a new beach/holiday house at Angourie.

The selected site had one of the original fisherman’s fibro cottages looking south across the reserve to Back Beach and One Man headland.

The family was based in QLD where they have  busy consultant practices.

Their teenage sons are active surfers and, as the Angourie area has some of the best surf-breaks

in Australia, they were looking forward to having access to open ocean beaches away from the more sheltered waters of the Great Barrier Reef.

The whole family is actively involved in Ocean Sports, so having a beach/holiday house at Angourie was a perfect fit for them.

As we have previously designed over 15 houses in the  Angourie Village, we have a very good understanding of the natural & built environment as well as the method Council was using to apply the planning & design codes.

In preparing initial design sketches for the  house I followed my usual practice of analysing the block for views, aspect, solar & wind access, siting of adjoining houses etc..

The clients  had very firm views on the type & style of beach house they wanted, which at times conflicted with my function-based approach to design.

I told them that she read too many Home Beautiful glossy magazines!

However over time, and a few design revisions, we did reach a design compromise which ticked most of, if not all of the boxes.

One advantage we had was that the builder, David McGregor, lives across the road from the site.

Dave lives in an early Witzig house on Angourie Headland, and it was my suggestion

that Dave was the most suited builder for the job .

To get the result I wanted I had to the client’s concern and reluctance to use an architect- recommended builder rather than put the job out to tender.

However I arranged a first face-to-face meeting which finally resulted in the clients accepting my recommendation to engage David to build the house. 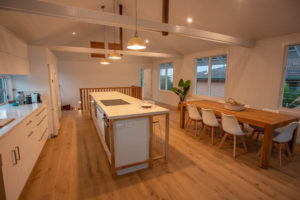 Subsequently the construction of the house proceeded without any problems.

On budget and more-or less on time.

The family  & the builder are now close friends & neighbours, which is as fine an outcome as we could hope for.